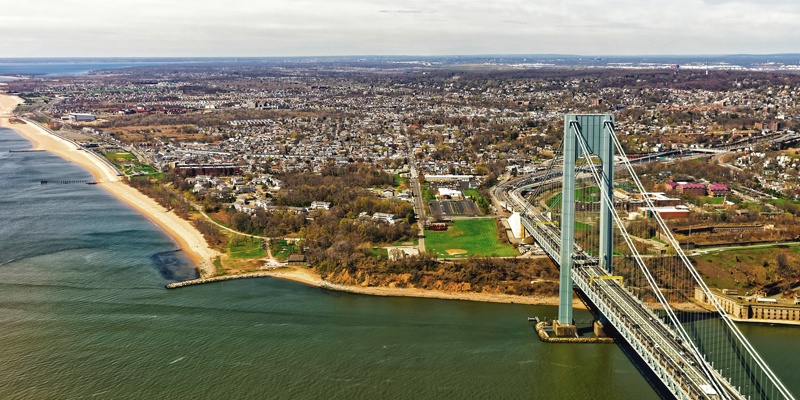 Though it's one of New York City's famed five boroughs, it's no secret that Staten Island tends to be the last to come to mind. But you know what they say: Sometimes you save the best for last!

Seemingly in a world all its own, Staten Island possesses old-school neighborly charm, a deep appreciation for Italian food, and with 12,300 acres of protected parkland, the proud title of being the greenest of the five boroughs.

It might be nicknamed "The Forgotten Borough," but its residents wouldn't change a thing.

With an estimated 2015 population of 476,015, Staten Island experienced 1.6 percent growth during the last five years. The best part for residents? Staten Island is double the size of Manhattan, with one-third its occupants—resulting in plenty of green space, and actual backyards! Whether you're looking to raise a family, purchase your first home at a decent price, or you have a hankering for authentic lemon ices, you'll want to consider this 58.8-square mile suburban metropolis.

Here are some fun facts about S.I., along with some helpful necessities should you decide to move to this whimsical New York treasure:

Staten Island is the wealthiest borough.

It's also the greenest borough.

With 170 parks and 12,300 acres of protected parkland, residents have plenty of room for activities.

The Staten Island Dump has been closed for nearly 20 years.

What was once its most recognizable feature and spawned stinky stigmas, the world's largest trash dump actually closed back in 2001. What's happening with the land today? It's being converted into yet another Staten Island park!

It's known for its diners.

And we love diners. Two neighborhoods especially renowned for their diner food and 24/7 service are Annadale and Woodrow.

Staten Island is the most cost-effective of the five boroughs.

If you're into some scares, there are tons of spooky and abandoned spots on Staten Island. A few of the most popular include the Kreischer Mansion, Bedell Avenue, the Old Bermuda Inn, and the Conference House.

It's home to one of New York's most popular tourist attractions.

And it's free, too! The Staten Island Ferry brings approximately 70,000 passengers to and from NYC each day, leisurely floating right past the towering Statue of Liberty and Ellis Island. They even sell snacks and beer on board—what's better than a casual 25-minute, free cruise with stunning views of New York Harbor, and a cold one?! Not much.

The pizza itself is worth the trip.

With a majority of the Island's population of Italian descent (34.7 percent, to be exact), it's no surprise the pizza on Staten Island is top-notch.

Local Tip: Denino's on Richmond Avenue is a Staten Island landmark, but be aware that it's cash-only.

Speaking of Richmond—the name is everywhere!

Richmond Avenue, Richmond Street, Richmond Place, Richmond Court, Richmond Terrance, Richmond Road—the entire island is even classified as Richmond County! All those "Richmonds" come from a prominent historical figure in the area, Charles Lennox, who was the 1st Duke of Richmond.

Check out these four tips for a successful move to Staten Island:

1. Set aside plenty of planning time.

With a move, it’s crucial to give extra attention to the planning process. Make sure you start preparing at least six weeks prior to your moving date.

Pro Tip: It's important to check on moving truck accessibility for Staten Island. Additional charges are incurred if the household goods need to be transferred to a smaller truck for a gated community.

2. The sturdier the box, the better.

Invest in some good, durable, moving boxes. Your most prized and personal possessions are going to be making their way into this borough, so it’s imperative they're protected.

Pro Tip: Check out your local liquor stores, supermarkets and banks. They tend to give boxes away for free!

Think about your current items and determine what you absolutely need, and what can likely get tossed or donated. Bring your essentials, but consider getting rid of that old ironing board and investing in some new kitchen appliances once you’re settled in.

4. Take inventory, and detail those boxes.

It pays to be extra-organized. Take pictures of all your belongings so you have a record of exactly what you're bringing and leaving behind. And don’t forget to label those boxes as detailed as possible—nothing is worse than getting to an empty house or apartment with a truckload of un-labeled or sort-of-labeled boxes. The better you detail your boxes, the easier it will be when unpacking and jazzing up your new spot.

5. Get your business in order.

It’s a good idea to conduct utility research and have all of your necessities smoothed out before arriving. Ensuring your water, electricity, cable, gas, etc. are all set and ready to go will streamline your move and transition that much more.